The 7L guide for rubber soles and metal toe taps 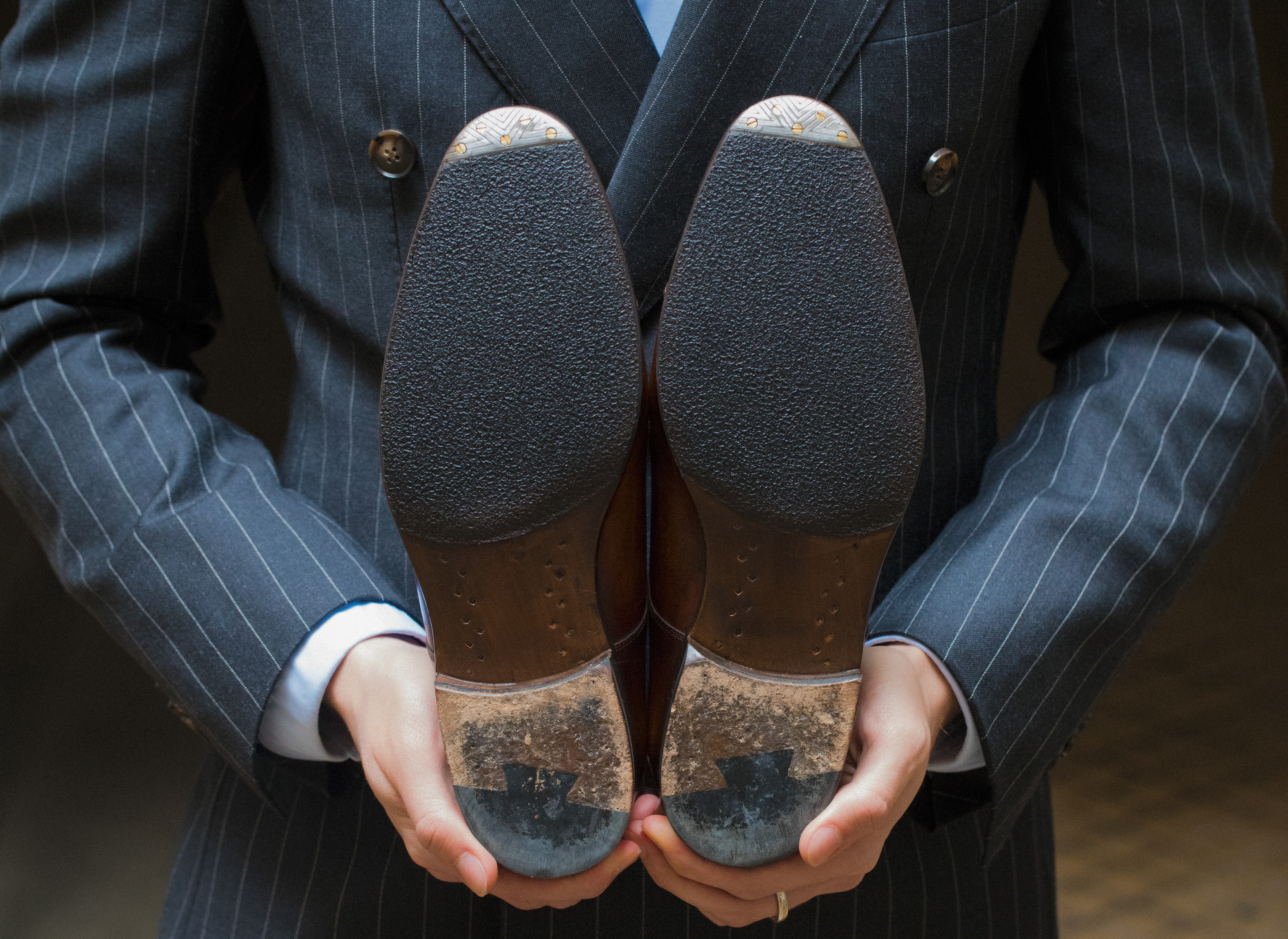 You might already have heard the terms rubber sole and metal toe taps without truly understanding the utility behind it nor why and when to have them put on. We will try to answer all your questions in this article.

1. What are rubber soles and metal toe taps?

The rubber sole is a thin plate of rubber or plastic whose goal is to protect the front part of a leather sole.

Figure 1. Example of a shoe with rubber sole (monsieurchaussure.com)

There are mainly two types of rubber soles. The main supplier is Topy, which has two ranges:

Figure 2. On the left, the Topy Élysée and on the right, the Topy Top Gum

The rubber sole is recommended because of its flexibility and also because it enables better breathing of the sole. Moreover, we tend to feel it less during the walk and it is overall more aesthetic (the plastic ones have a big Topy logo on the whole sole).

You need to consider the thickness that differs depending on the sole you choose. The more the thickness is important, the more durable the sole will be, but the more the shoe will be stiff. Élysee starts at 1mm and Top Gum at 1,8mm.

Metal toe taps are bringing a supplementary protection at the front of the sole. This zone being particularly solicited during the walk, it will prevent the wear of the sole.

There are also two types of products regarding metal toe taps:

Figure 5. Focus on a "bean toe tap" nailed on a Topy Élysée

Also, there are two ways to put metal toe taps:

Regarding the material, the brass is to be considered because it does not rust.

2. Why should I have them put on my shoes?

Rubber soles and toe taps are usually put on at the same time. There are two schools of thought in the shoe enthusiasts circle: the ones that have rubber soles and toe taps put on and the others that don’t. For the ones that do not, they think that the shoe would be too stiff and that the rubber sole would prevent the leather sole from breathing out and would then make it crackle. This is not entirely untrue.

However, letting your leather soles with no protection will make you need to have your shoes  completely re-stitched when the soles will be weared out. This is not the same cost as changing rubber soles: starting at 120€ for a complete re-stitch. Indeed, the cobbler will need to entirely re-stitch your shoes which is a way more tedious process. In comparison, changing rubber soles costs around 40€.

Figure 6. We can see here the cork behind the leather sole that has been weared too much. It is now too late to have rubber soles put on. The resoling is now inevitable.

Rubber soles protect the shoes from moisture and prevent the wearer from slipping. Also, they contribute to increasing the longevity of the leather soles. If the soles do not feature a “closed channel stitching”, it will also protect the seam (=open channel).

Focus on the closed channel stitching

Closed channel stitching is a construction method of the sole which consists of cutting into the sole to create a little flap of leather that will be lifted up. Once lifted up, the craftsman cuts the channel and stitches the sole to the welt. Then, he closes the flap back down to hide the stitching. It is a really qualitative process that provides more aesthetic soles.

Figure 7. Photograph of a closed channel sole on a brand new 7L shoe

Figure 8. Photograph showing the leather channel during the sewing operation

Careful ! During the first wears, the flap of leather covering the stitching can start to erode. This is completely normal. Putting a rubber sole will protect the stitching. However, you can continue to wear your shoes without any protective soles.

3. When should I have them put on?

To put on rubber soles and toe taps, we recommend that you go to your trusted local cobbler. He will know how to proceed. Some brands can offer this service directly to customers, this is our case. Please note that you will not be able to change your rubber soles indefinitely due to the fact that the cobbler needs to sand to sole before putting the rubber to insure that it will stick properly.

You must've understood it already, we are in the "rubber soles" team. However, if you have lots of pairs with which you can rotate, putting rubber soles is not going to be required. Also, it is very pleasing to walk with leather soles on carpets.

No, it is not possible to put toe taps and then rubber soles because the sole would be more likely to come off.

It, it is absolutely possible to put metal toe taps after rubber soles.

Yes, indeed the leather is lightly sanded during the operation.

No, it is unnecessary to put rubber roles on the entire sole. Indeed, the foot arch is not in contact with the ground.